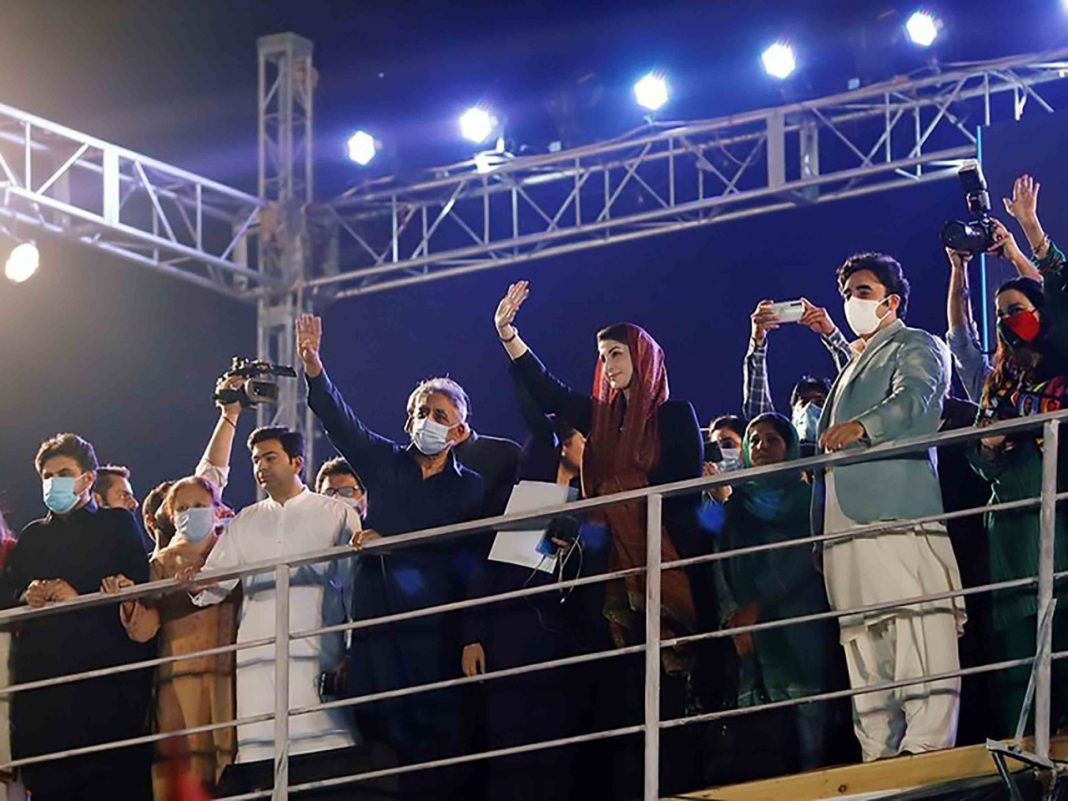 Country’s opposition parties, after months of protracted negotiations trying to come together, finally unified under the Pakistan Democratic Movement (PDM) in end September. This seemingly formidable anti-government alliance of eleven opposition parties, was born at an “All Parties Conference”, hosted by PPP in Islamabad on 20 September 2020. The coalition led by Jamiat-e-Ulema Islam (JUI-F) leader Maulana Fazal ur Rehman was supported by the Pakistan People’s Party (PPP), Pakistan Muslim League-N (PML-N) and other smaller parties.

Many were initially surprised with this choice of leadership, but it became less shocking when media observed that only Maulana demonstrated the street power that was needed to bolster jalsas in Karachi, Quetta, GB and KP. PMLN admittedly has a large vote bank across small towns of Punjab and PPP has ability to mobilize crowds in interior Sindh – but both mainstream parties lack ability to mobilize crowds in Punjab, Karachi, GB, Baluchistan and KP.

The media highlight of the APC gathering was the unusually hawkish speech given by former prime minister and leader of PML-N, Nawaz Sharif who attacked Pakistan’s military establishment in his video address to the “All Parties Conference” and called for the need to protect democracy. He stated at the time, “We are not here to overthrow the government, but our aim should be revival of the democracy”.

Government ministers kept reminding the media that Nawaz, espousing the cause of democracy and constitution is an absconder from courts, had escaped to London on the plea of serious risks to health and is now not coming back despite repeated court notices – but Nawaz was nevertheless suddenly seen as a challenger causing damage to what PMLN leader Khurram Dastgir first described as a “PTI/Establishment Hybrid regime.”

The first PDM rally in Gujranwala, on 16 Oct 2020 attracted a good crowd. This is an area which has been a PML-N stronghold for decades. The opposition speeches repeated the usual allegations of government as a selected imposition and an incompetent regime that destroyed the economy. However, the highlight was ex-PM Nawaz Sharif’s video link address in which he named General Bajwa, COAS, as being responsible for the current situation in Pakistan and directly accused him “Gen Qamar Javed Bajwa, you packed up our government, which was working well, and put the nation and the country at the alter of your wishes.”

The direct attack on the army chief did not sit well with many of the other opposition leaders, including Bilawal Bhutto, who distanced themselves after the Jalsa from his comments – this was the appearance of first strains and PPP did not allow Nawaz to speak at the Karachi rally.

The October 18th Karachi rally, although smaller in turnout compared to the earlier Gujranwala rally attracted greater media attention. It was due to the controversy surrounding Captain Safdar’s childish hooliganism at the Quaid’s mausoleum, his subsequent arrest by Sindh Police under pressure of establishment agencies, a politically orchestrated response of Sindh police supported by PPP and Army Chief, Gen. Bajwa calling Bilawal Bhutto and promising an enquiry.

Quetta rally on 25 October, held at the Ayub Stadium was a show mainly of Maulana Fazal ur Rehman – and Nawaz got his freedom to speak via video link from London. But opposition speeches were more of the same, it was becoming obvious that they have nothing more to say. The only way they could create headlines was by saying ever more harsher things.

Mehmood Khan Ackazai had already offended Urdu speaking communities by his comments in Karachi rally. When an opposition leader, during Quetta rally, demanded “autonomy for Baluchistan” media did not like it; backlash was so severe that he had to offer apologies and explanations.

Within days of the event, PML-N president in Baluchistan, Abdul Qadir Baloch, announced his resignation after PML-N’s controversial decision not to invite former Baluchistan chief minister Sanaullah Zehri to the rally. PMLN tried sounding stoic but the damage was done and the whole movement was losing steam within three weeks of its launch.

On 29 October 2020, former speaker of the house Ayaz Sadiq tried putting some life back in opposition’s narrative when speaking in the National Assembly he claimed that “Pakistan’s Army chief was sweating and trembling with fear when the Pakistan army captured Wing Commander Abhinandan Varthaman, post-Balakot in February 2019; fearing a potential attack from India”. Sadiq’s comments were “God’s gift” to the Indian media, government, the demoralized public and an embarrassed Indian Air Force after PAF strikes inside Indian controlled territory in 2019.

Apparently, Sadiq’s comments were used to full political benefit by Modi’s BJP in Bihar’s elections. It was obvious that Ayyaz Sadiq, usually seen as a sober person, was dancing on the tune being set by Nawaz from London. But many in the media wonder: who is dictating to Nawaz and what are his compulsions in pleasing Modi regime? PTI Government ministers got a field day proving Nawaz and PMLN as Modi’s stooges and few in media had any desire defending Ayyaz Sadiq, Nawaz or PMLN on this.

A respectable showing in the Gilgit Baltistan elections could have bailed out PDM. But GB always votes for center, there could have been some hope if PPP, PMLN and JUIF would have played smart and fought under one banner. But the inexperienced Bilawal and Maryam attempted compensating smart strategy by colorful rhetoric, BBC interviews and expensive costumes. Maryam’s outfits and headgear entertained media; comparison of her outfits with those of Halime Sultan was rife on social media.

But political polls throughout conducted by Gallup, Pulse and others showed that PTI was the most popular party and its leader Imran Khan was getting approval ratings of (42%) with Bilawal (17%) and Maryam trailing with a hopeless 3% support. PTI, quiet predictably got a usual majority; it won 10 seats out of the 23 directly contested and with the help of its allies (MWM) and independents it managed 18 directly elected seats and after the additional indirect seats its tally went up to 22 in a house of 33 making it possible to select its Chief Minister, Speaker of the House and Deputy Speaker.

Opposition cried election rigging, but no one in the media took it seriously, elections were small in scale with limited vote banks, looked transparent and it was obvious that GB voters and constituency politicians favor going with the party in power in the center. In the 2009 elections, PPP won with 20 seats, in 2015 PML-N won with 22 seats, the same as the PTI got in the current elections.

Bringing 11 disparate parties on one platform, with one narrative, was always a challenge. Inability to think through was visible from the very beginning but the last nail in the coffin, becoming more obvious with hindsight, came when PMLN’s unofficial supremo, Mayram Nawaz, in a BBC Urdu interview, on 12 Nov, after a Gilgit Baltistan rally, espoused willingness to talk to the establishment – however on the condition that they should first remove the Imran Khan government.

This attempted softening of stance towards the army may have been the result of increasing pressure from secondary tier PML-N leadership. Many, getting feedback from their own constituencies from across Punjab, were not happy with Nawaz Sharif comments and Maryam Nawaz’s speeches against the army leadership. But an inexperienced Maryam, while making the much-needed correction could not handle the narrative.

Her comments were seen as a volte-face, a total rejection and denial of the principles she and her father had been trying to market for the past several months. From the bold principled rhetoric of “Democracy and civilian supremacy”, she was suddenly saying that she was ready to cut deals with the army establishment to get rid of Imran Khan. Nothing could have been a greater treat to PTI ministers and social media teams that roasted her for her hypocrisy and dynastic aspirations.

By the time the Peshawar Jalsa was held on 22 November, the very idea of large jalsas and gathering was losing steam. Fear of the second wave of pandemic had spread widely. Daily death rate had touched 50. PDM parties had decided to go ahead with the Jalsa despite strong opposition by the federal government and increasing criticism by the media and the courts.

KP government and Peshawar district administration never gave legally required permission for the rally. NCOC had applied a ban on marriage hall gatherings; on 19 November Islamabad High Court on a petition by the Marquee Association fully supported NCOC’s decision in the interest of public safety. Few turned out to attend PDM rally in Peshawar and opposition leaders looked like making a fool of themselves.

As if all of that was not bad enough, Maryam Nawaz further damaged her credibility when she appeared briefly in the Peshawar rally, around 2.30pm, and left announcing that she is leaving because she has just heard that her grandmother, Ms. Shamim Akhtar, had died in London. She then tweeted that the government was so cruel that they did not even inform her of her grandmother’s death and that she is now telling Nawaz not to come back to Pakistan. It was a dumb political trick because media quickly found out that her grandmother had passed around 12, noon, and that all family was promptly informed. She was seen trying to earn political sympathies out of her grandmother’s death through outright lying.

While PDM insists that it will carry on with jalsas in Multan, Lahore and Larkana it’s not making any sense to anyone anymore – at least not in the media. PDM rhetoric is now being viewed as insensitive and the opposition is being aggressively asked why they are playing with people’s lives.

Anchor after Anchor has started showing statements by the opposition leaders in March, during the first wave of the pandemic, calling for a strict lockdown and accusing the government of playing with people’s lives versus their current stance. So the Sindh government now supporting a Jalsa in Larkana started looking stupid!

The final straw on the camel’s back came as Bilawal Bhutto tweeted that he had corona but suggested that he would address the Multan Jalsa via video link. Analysts now feel that in October, the PDM movement and their jalsas held some promise and maybe they could have extracted some concession for themselves from the government. But now given the blunders committed on the way and the totally changed scenarios PDM needs a bailout and it is only through Covid-19 that they can save themselves.