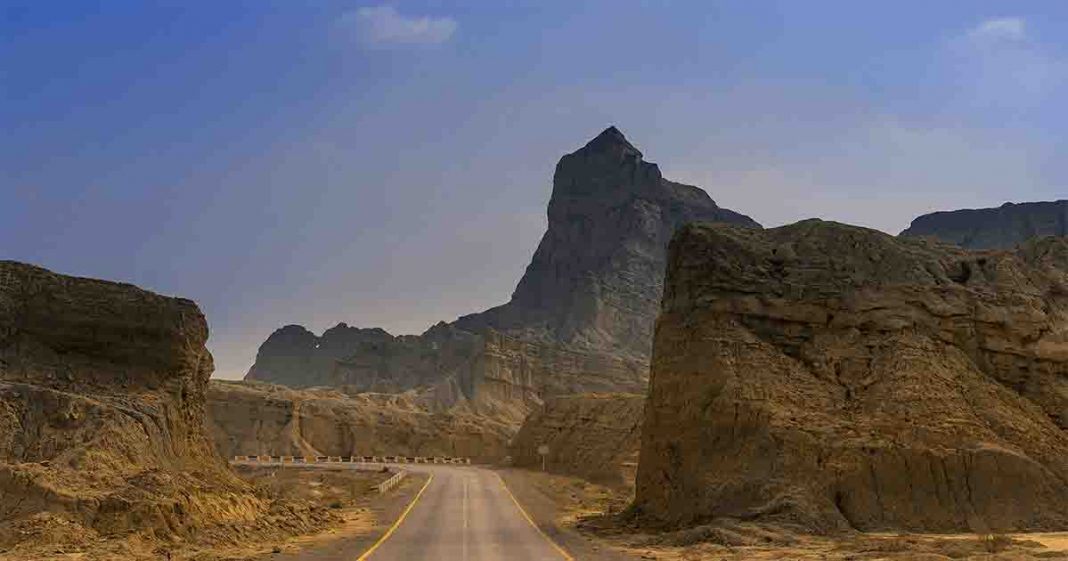 In his recent interview with GVS, CM Balochistan Jam Kamal Khan referred to this gigantic structure running along the Arabian sea as “Balochistan Coastal Highway” – both sardars and the commoners agree that generations will remember this engineering feat to come and has laid the foundation for integrating the far-flung areas of Balochistan with the rest of the country and the region.

A dusty, dirty Jeep road – that unnerved travelers due to the fear of bandits, the severity of the weather, and stories of vehicles collapsing on an unending journey from Karachi- was by the turn of the millennium turned into a dual carriageway.

This state of the art coastal highway which winds its way through some of the most pristine parts of Pakistan – from the deserted areas where the windswept erosion has created a striking, poignant princess, “Princess of Hope” – to the beautiful deep blue shores of the Arabian Sea where the white sandy beaches beckon you to take off your shoes and feel mother nature at her most picturesque glory.

Makran Coastal Highway (MCH), or the 653 km N10 highway as it is officially known (or the “Balochistan Coastal Highway” as CM Jam Kamal calls it in his recent interview with GVS), runs across the coastal line of the Arabian Sea in Pakistan. It was built by the country’s premier national strategic organization, Frontier Works Organization (FWO), during 2002-04.

The highway originates from Karachi – the heart of Pakistan’s commercial activity – and traverses through Ormara, Pasni, and reaches its Jewel in the crown – the deep-sea port Gwadar before going on to Jiwani – a border town with Iran. But MCH is not merely a tourist attraction; it is a national logistic backbone that has played a huge role in transforming the lives of the common people living along its stretch over the past two decades.

While the idea of exploiting the potential of this large coastal belt was being discussed for a long time, the decision to build Gwadar port was initially taken in 1991 when the hydrocarbon-laden and mineral-rich Central Asian Republics (CARs) gained independence after the breakup of the Soviet Union.

These mostly landlocked states, which depended on Russia for transportation of goods and resources, needed access to the world. The shortest and most feasible access to the North Arabian Sea’s warm waters was through either Iran or  Pakistan. However, the Pakistani government lacked funds to build upon the idea, so nothing much came out of it.

Gwadar had to wait for a strategic mindset. And it appeared in the form of Gen. Musharraf. After 2001, a serious effort was made to develop Gwadar port, and its surrounding areas and a Chinese company started construction work at the site in 2002.

Given the advantages sea transport has over other modes of transportation, over 90% of the world’s trade moves through oceans. Pakistan is no exception; most of its trade is dependent on the Arabian sea.

Since its inception, the country has depended solely on the Karachi port complex (which includes Port Bin-Qasim). However, by the beginning of the 1990s, the two adjoining ports were packed to congestion creating bottlenecks for trade. There was thus a dire need to avail the facilities Gwadar could provide.

Construction of the Makran Coastal Highway (MCH) was essential to the development of Gwadar port. Without MCH, Gwadar would have been an island sitting without the bridges that connect it with Karachi in the south and the rest of Pakistan and the larger world around in the north and the west.

Similarly, South Balochistan is a region full of natural resources – hydrocarbons and precious minerals. However, the province lacks the infrastructure to exploit and transfer these resources. MCH represents the beginning of that infrastructure that links the resource-rich fields to the rest of the country. In addition, the Makran Coastal highway has helped to open up the coastal areas of Pakistan for domestic tourism.

But perhaps the most important dimension of MCH is the strategic connect it provides to Gwadar. Gwadar, with the right communication links, not only provides an opening to the Central Asian Republics towards the Arabian Sea but also offers China a potential alternative to the vulnerable choke points in the Malacca straits. No wonder many regional and international players wanted to thwart the development of Gwadar and its connectivity with the region.

The Frontiers Works Organization (FWO) was awarded this difficult assignment given the region’s security hazards and challenges of development in that complex geography. FWO had emerged as Pakistan’s national strategic organization when it completed the challenge of developing Karakoram Highway (KKH) – the world’s highest paved road network – in record time.

State of the Art Highway

Prior to constructing the Makran Coastal Highway (MCH), the old dirt road would easily take over 24 hours to go from Gwadar to Karachi. Passengers and trucks were commonly exposed to banditry, making it a hazardous journey and one which they only undertook during the day, thus increasing overall transportation time and expense for all stakeholders.

In small sections of this journey, you found a single-lane metal track road if you were lucky on either side of towns such as Ormara or Pasni. MCH that cost over $12 billion to construct is a state-of-the-art dual carriageway with modern design features.

It originates from Liari and passes through Ormara, Pasni, Gwadar, and several other small towns and villages, finally terminating at Jiwani close to the Iran border. The total length of MCH is 637 Km, and it comprises four sections.

With an asphalted double surface-treated highway, on the level of international coastal highways, with the main carriageway of 7.3 meters (3.6m one lane), providing for additional 3 meters of the emergency shoulder on both sides, MCH is designed for all kinds of traffic.

It provides a structure to allow speeds between 50 – 100 km/ hour depending upon the geographical terrain (100km on level roads and 50km on hilly terrain) it is going through.

MCH has almost 65 bridges built along with it, out of which the longest bridge is Shakidor, The Shakidor Bridge is named after the Shakidor dam, which is constructed near Pasni to provide clean drinking water to the people of Pasni.

Makran Coastal Highway comprises the following sections. FWO undertook the majority of the project except for one section.

Engineering against challenges of distance and climate

Carving out a road through the hard mountains of Aghore may appear to top the list of engineering challenges, but the non-availability of water in most construction vicinities was a complex task of management for FWO leadership.

Water – both for drinking and construction – had to be transported from hundreds of kilometers away, usually from over 200-400 km away.

Similarly, construction material had to be transported from Karachi -at a distance of 600 km. Steel, bitumen, and cement were all hauled from Karachi but even huge quantities of sand, crush & asphaltic material used for the road pavement, bridges, culverts, drainage, and protective works was transported from the approved quarry sites approximately 100 km away.

Over 25 million cu ft of various sizes of construction materials (around 843,330 dumper loads) had to be used. Over 8 million liters of POL (petroleum, oil & lubricants) were used to construct the Pasni – Gwadar sector alone. But this was not all.

A harsh climate meant frequent sandstorms, which reduced the project’s potential working hours and affected employees’ health. The shifting sand dunes on the road also meant additional men and machinery were needed for clearance. In addition, overflow in various nullahs and backflow from seawater and flash floods would also disrupt logistic and project work.

FWO engineers were advancing a logistic structure in an area where none existed before. Thus, no basic facilities of any sort existed in the near vicinity. Both skilled and unskilled labor were not available locally; men often had to be brought from distant Sindh or remote Punjab areas. Since no modern logistic routes had ever existed, there were no repair facilities for any machinery or tools.

There were no medical facilities for men that fell victim to the harsh climate and bad water – and given the austere cultures, there were no Florence Nightingale either.

MCH was thus a vast construction enterprise, to begin with, that was made far more difficult by challenges of geostrategy, history, and geography. It took over one and a half million hours of mechanical plant/equipment effort; that meant an average of 232 plant/ equipment working hours each day.

A plethora of mechanical pieces – dozers, dumpers, rollers, water bowsers, loaders, graders, asphalt plants, batch plants, pavers, concrete mixers, rigs, cranes, and various other equipment – as per project requirement were used to accomplish the task. While construction machinery was vital for the project, any repair work could not be done locally, and even minor repairs had to be sent to Karachi.

All these challenges added to the project’s cost, but despite this, MCH was substantially completed within three years between 2002- Dec 2004 – four months ahead of schedule. With the completion of the Makran Coastal Highway, the average journey time between Karachi and Gwadar was reduced to approximately seven to nine hours and reduced transportation cost. No doubt, generations to come will celebrate MCH as their route to modernity.

MCH has proved itself to be a catalyst of socio-economic and cultural change across its route. There was a time when fishermen used to bring their fish to Gwadar Zero Point by the evening and try to sell it for as little as Rs. 5/Kg, but not anymore. Now the fish from the towns of Ormara and Pasni has markets as far as Karachi -as time and distance have shrunk.

The economic activity got a significant boost because now locals all along the coast have options – and these are increasing – to sell their products in national and international markets.

Traffic along the highway itself is a pointer of changing things. On average, it is calculated that in 2000, around 28 vehicles traveled on the road; by 2021, this is now 700 vehicles, and it is expected to significantly increase when Gwadar becomes fully operational.

The transit and resting areas along the highway help small businesses flourish – whether they sell agricultural products such as dry fruit to travelers or domestic handicrafts.

MCH has opened up a marketplace of bricks, books, schools, ideas, and hopes. Along the highway, numerous newly built housing schemes have sprung over in the past two decades that tell the story of a transforming Balochistan. These include Gwadar, Golf City, New Town, Naval Anchorage, King Park & Green Palms that have been inaugurated as Gwadar has opened up due to MCH.

MCH has brought not only trucks and tourists, but along with these, it has opened the areas for education, health, and vocational training. In the past few years, since MCH, 11 schools and four major hospitals have appeared in addition to the shopping malls. Gwadar’s financial district now includes 1200 homes over an area of 3.6 million sq ft under GDA. As mentioned above, four major hospitals (Al Shifa, National, GDA & Jahanzeb Johi Zai Hospital) have been inaugurated, and a $ 30m up-gradation of GDA hospital from 50 to 150 beds is taking shape.

The construction of a vocational training institute was approved on 1st April 2019 for $13m. The construction of the University of Turbat was completed in September 2016, and the Panjgur campus was opened in October 2020. Two major hotels have opened (PC continental & Sadaf resort) and have started employing the local population.

Future activities at Gwadar are expected to generate about two million new jobs in 8-10 years. Gwadar Development Authority estimates that 1.7 million people will move to Gwadar within thirty years.

It is expected that the size of the city’s economy will surge from $ 0.6 billion to $30 billion annually after the full development of the port that was built for $ 248m and inaugurated in 2007.

The Makran Coastal Highway has proved a milestone in the development of Balochistan as well as in Pakistan. Chief Minister Jam Kamal makes sense when he says that generations to come will remember MCH.